The Successes and Challenges of working in the context of an In-situ Upgrade: An Architect’s Perspective. 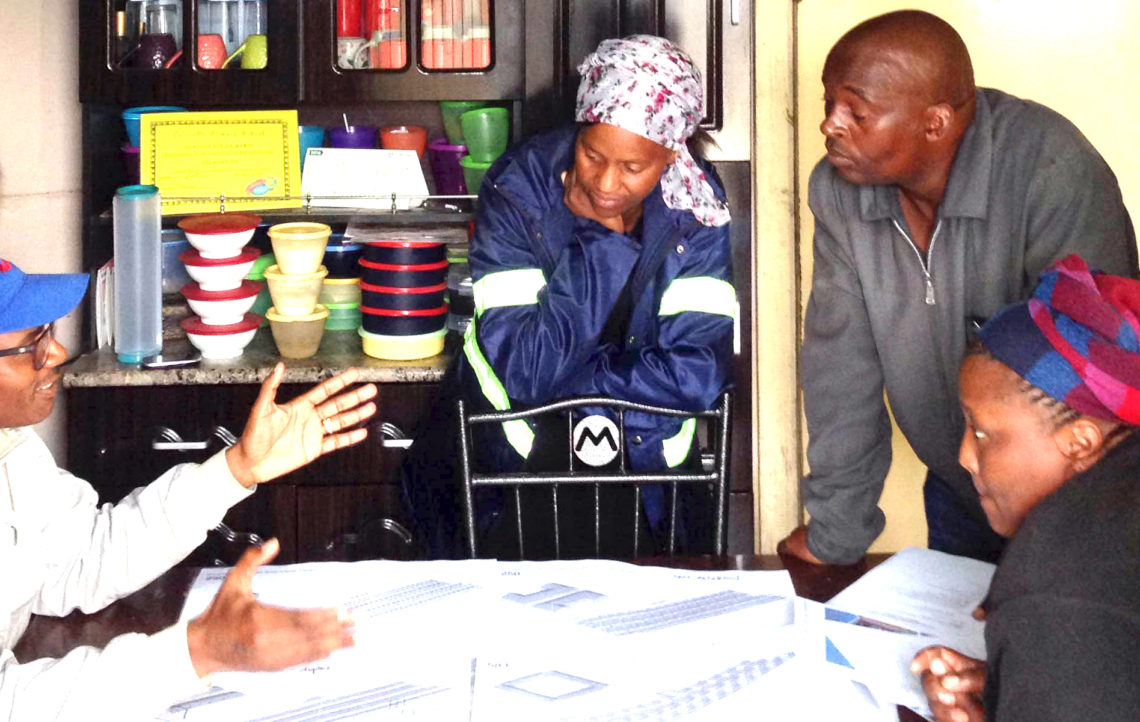 By Claire de Trevou on behalf of People’s Environmental Planning:

Phola park is a dense informal settlement situated on City of Cape Town land in Philippi East, 20 km from the Cape Town CBD. The settlement is located just behind the Philippi Village – ‘an entrepreneurial development with a social impact’ – and holds a lot of development potential.In the early 2000’s households from a much larger informal settlement were upgraded and developed into a low density RDP ‘suburb’. However, due to political tensions and budget constraints, not all the residents were accommodated in the development, leaving a small portion of the informal settlement undeveloped. Today Phola Park consists of 961 shacks, built on roughly 32 000 square meters of land.

As part of a National Upgrading Settlements Programme (NUSP) initiative, People’s Environmental Planning (PEP) began working with the community of Phola Park in 2014 to identify major environmental risks, as well as their development goals/desires within the settlement. From this, the most critical risk identified was the open storm water channel, which ran through the settlement, which was being used as a dumping pit. As a result, the channel became infested with rats, mosquitoes, was the source of waterborne disease, and a general health and safety hazard. Following the NUSP assessment, the community leaders, along with technical support from PEP, negotiated with the City of Cape Town and motivated for the channel to be upgraded and enclosed. The community’s efforts were successful and upgrading began in early 2016. Finally, in April of the same year, the channel upgrading project was completed and the mayor came to officially open – what has become – the new public space within Phola Park.

During her visit to the settlement, the Mayor said “Now that this has happened, I guess you want to talk about houses?” and promptly invited the community leadership to a meeting to discuss how the City would go about delivering houses.

Building on the momentum of the upgrading of the channel, PEP began working with the community to design an incremental upgrading development plan for the settlement. The primary focus of the project was to facilitate a participatory design process to ensure serious community involvement in decisions around housing typologies, public space, amenities, and how the settlement would be upgraded. This would be achieved through a series of workshops, outings, and ‘learning exchanges’. The initial NUSP workshops had established a broad sense of the community’s long, medium and short term needs and goals; and these workshops delved straight into dealing with the issues and decisions around settlement upgrading and housing.

The size of the land the informal settlement currently occupies is only able to accommodate 250 typical single storey detached RDP houses, and 600 double storey, semidetached row houses. The initial workshops were geared towards presenting various medium to high densities models that have been implemented around the world in similar contexts, with a focus on South African examples. Spatial models and supporting plans introduced the participants to the benefits and opportunities afforded by medium density options, and allowed for discussion and debate among the group. In the initial discussions, the representative committee expressed that their ideal typology option would be a single storey, freestanding unit. However, as the other typologies were unpacked, they expressed a willingness to compromise and have the site developed with double storey, semi-detached row houses; as it would allow for more residents to be accommodated on site.

As the workshops began to explore the arrangement of the houses on site, and the various urban configurations the narrow site could accommodate, it became increasingly more important to find participatory methods for engagement which allowed for concepts to be introduced in an accessible manner, without being too prescriptive -so to allow the workshop participants to explore the broader ideas and issues, rather than get into debate around details too soon. This was made obvious in a workshop where a 1:50 scale model of a house unit was introduced, and the conversation quickly turned from discussing the benefits of medium density housing, with pockets of public space; to whether a bath was better than a shower. While this is an equally important discussion for the group to have, it came far too early in the process. 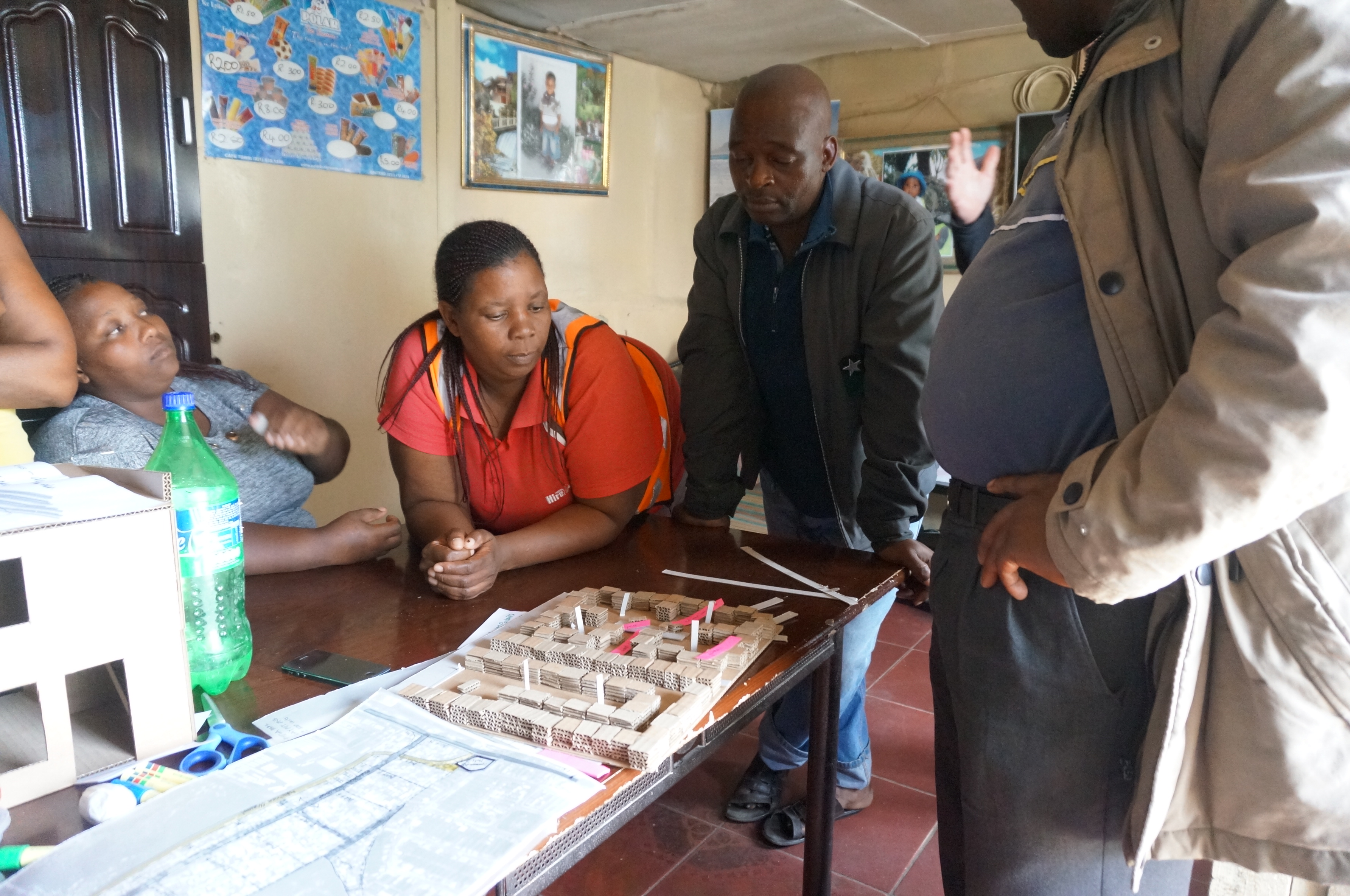 It was very difficult to express to the workshop participants, that they would not get houses by the end of 2016. They would probably not even get houses by the end of 2026… But the Mayor’s  promise to deliver houses, had given this community a false sense of hope. This was fuelled by the introduction of a very realistic physical model so early on in the process. While the models were restrictive at times, the models of the entire urban development were also exceptionally helpful for the members to understand the concepts such as shared public space, streetscapes and public-private thresholds in 3D. Again, these models made the development very ‘real’, and as such, instead of discussion broad ideas, concepts and issues around public space and settlement layout; the group became interested in talking about small details, such as trading money spent on trees for perimeter fences.

Architects and spatial planners tend to have fairly rigid ideas of what is ‘good and bad/right and wrong’ in terms of design and urban planning. As such, it was challenging as a young practitioner entering a participatory space to leave any preconceived ideas at the door, to ensure the needs of the community were heard. It is a constant challenge to listen to what is being expressed through the needs and wants of the community, understand the essence of the desire, and then interpret that into a design solution, which may not ‘look’ like what the community had wanted, but still responds to the underlying needs and desires that have been expressed.

While the Project at Phola Park never got to the initial point intended by the design team, the exercise was both fruitful and productive. Through the workshops and design discussions, the design team was able to compile a comprehensive document describing the collaborative process, and illustrating all the various design options that were explored by the community representatives, with the designer team. This document was used by the community when they were invited to meet with the Mayor to discuss a way forward, demonstrating to the Mayoral committee that the leadership of Phola Park is actively engaged and committed to the upgrading of their settlement, and are not just waiting for a government hand out.

Taking the lessons from the engagement process, the intention from PEP’s side is to continue working on an incremental upgrading plan with the leadership of Phola Park.