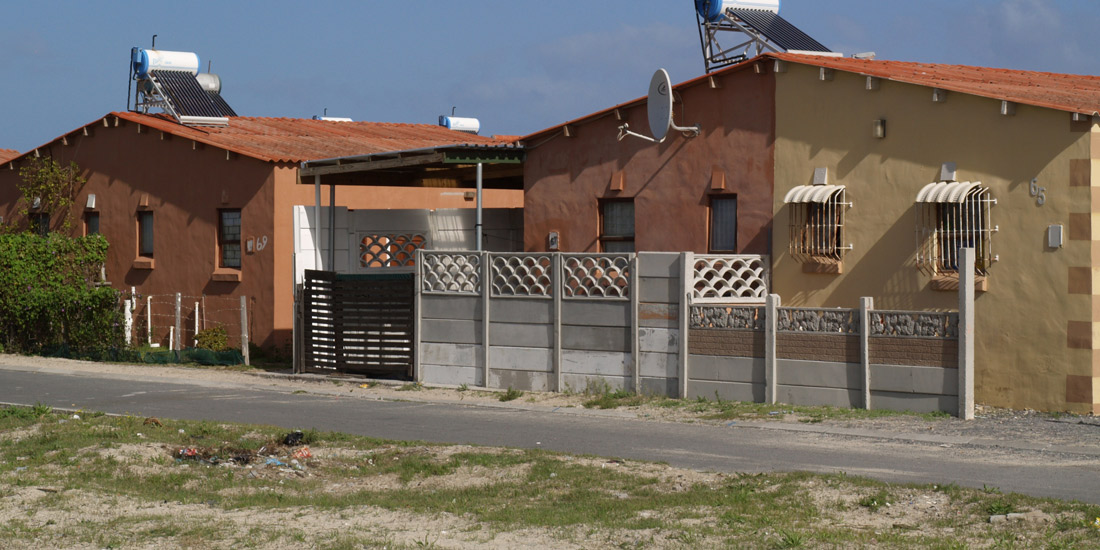 Regardless of government and others efforts over the past two decades, South Africa continues to face significant challenges in assisting the poor in access to a decent house and basic services.

According to current estimates, the housing backlog stands at about 2.1 to 2.5 million units.  This equates to 12 million people currently without adequate housing and the deficit continues to grow.

Since 1994, much of the government effort has focused on the delivery of RDP houses through its National Housing Subsidy Programme.  The current subsidy amount for a ‘starter house’ of 40m² consisting of two bedrooms, a toilet and kitchen with sink, is set at R55 706 for top structure and R22 162 for infrastructure.  An additional 15% is available for coastal areas (SCCCA) and the geo-technical variance brings the total subsidy amount to approximately R100 000 per beneficiary.

A fully subsided housing scheme is targeted at the poorest of the poor with combined total household income of below R3500/month.

The government surely deserves credit for championing the housing needs of the poor for the last two decades.  However, delivering a basic house on a serviced plot remains a complex process, riddled with planning approval delays and overly high infrastructure costs.

There are significant challenges and hidden costs in the delivery of houses and basic services.

In a ‘green-field’ development, the first step is to identify suitable land with easy access to economic opportunities and other social amenities.  In many instances this hasn’t been the case with many government subsidy developments been situated on the peripheries of metropolitan cities, away from employment opportunities and transportation.

On completion of a basic feasibility study, the next step is to secure environmental and planning approvals.  Besides the cost factor, this process is entangled in bureaucratic red-tape and can take several years to obtain.  In some cases, acquiring rezoning and subdivision approval was the most enduring challenge and took five years.  This long waiting period puts a further financial burden on the “developer” and often derails the entire development.

Once all the approvals are in place, the next hurdle is financing the installation of land infrastructure such as roads, sewerage, stormwater, water and electricity. This is also one of the conditions of subdivision approval stipulated by municipalities.

Municipalities impose stringent and (we believe) unrealistic infrastructure standards as conditions of subdivision approval; simply because they take over and maintain the services on completion and due to a limited maintenance budget, would obviously prefer to keep maintenance to minimum – hence the demand for extremely high standards.  If these overly high infrastructure standards cannot be met, no clearance will be issued by them and the development will remain ‘illegal’.

There are several townships in South Africa which have been established for over a decade that have been completed with adequate services and houses but remain ‘informal’ developments due to municipality’s refusal to grant subdivision clearance and take ownership of the services – prior to the “developer” reinstating them to the current standard expectation.  It is mind-boggling that municipalities impose the same infrastructure standards on developments in exclusive upper market suburbs and townships alike.

For example, the current infrastructure cost for a 150 – 200 m2 plot in Mitchells Plain, Cape Town, ranges from R40,000 – R60,000 per plot (quoted price from a contractor on open tender).  However, only a maximum of R28,500 per site can be utilized from the subsidy for services – the “developer” having to cover the shortfall.  This means there will be a shortfall of up to R30,000 per erf that the “developer” has to recover somehow with very few options available.

Another burden in financing land infrastructure is the exorbitant amount of development contribution levy that has to be paid to municipalities.  Electrical and civil services levy could add up to R15,000 per plot, excluding any bulk infrastructure contribution costs.

The main underlying problem for many housing projects, funded primarily via the housing subsidy from the government, has always been the shortfall within allocated subsidies to cover the exorbitant infrastructure and land costs.  There are many incomplete subsidy developments around the country because of insufficient funds and the inability to access additional funds.

Fully subsidized housing developments are no longer financially viable or possible.  It is therefore important for PEP and other partners to start exploring alternative sustainable funding mechanisms to assist the urban poor without relying solely on the subsidy alone.

PEP, with its partners, has been exploring an alternative funding model – cross-subsidization.  Cross-subsidization by selling a certain number of houses on the open market is one option but then you’re losing opportunities for the beneficiaries and you immediately incur the cost of the development levies.  An alternative is to make a loan to beneficiaries to cover the shortfall that they can pay off over a period of time – with the obvious risks and finance costs that are associated.  I have no doubt that there are a range options that need to be explored.

The idea is also to integrate various income groups into a development and build economically and socially sustainable neighbourhoods.  The surplus from the sale or renting of some units in the open market could be used to cross-subsidize the shortfall of the infrastructure and land costs for the fully subsidized units.  This will also encourage the involvement of private sector finance in the lower end market.

(PEP is not supportive of the idea of housing been a “free hand-out” and would like to see more commitment and involvement, both financially and socially, from the potential beneficiaries of any development i.e. some sort of financial commitment or responsibility should be linked to the ownership of a home.)

Ultimately it will take everyone’s input and various funding mechanisms to tackle the chronic housing shortage.  It will take combined efforts from affected communities, government, civil society, donors and the private sector to build socially, economically and environmentally sustainable cities.