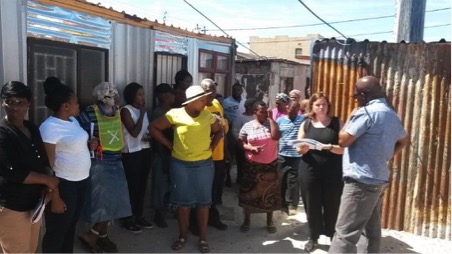 WA section is an informal settlement located next to a formal area in Khayelitsha with approximately +- 60 houses. This piece of land was a vacant recreational space. Back yarders started the settlement in the early ’90 s and due to the housing backlog in South Africa the population in the area grew .It is now estimated to be +-600 households. There are high rates of unemployment and poor sanitation services in the settlement.

In terms of the government attempting to provide basic services, the city installed one standpipe or communal tap that serves the +-60 houses. According to officials sanitation provision for WA section has not been addressed due to a lack of space to install these services. The community confirmed that the have approached the city officials about these issues and the only challenge was finding a space to install the toilets ,so the problem here is not lack of funds but rather lack of meaningful co design planning between the community and the government.

The community approached PEP and asked for support to get themselves organise and address the challenges in their community. PEP has subsequently introduced WA to the processes Informal Upgrading in a participatory and how these methods could assist to address the issue of density for more services to be installed in their community, namely toilets and more standpipes. PEP intends to enhance the capabilities and assets that are already existing in these communities, so that there are independently able to work directly with the government.

In the month of November 2018 WA experienced a fire for the first time. 5 shacks were damaged and one life was lost in the fire. WA section has only one standpipe that serves the whole community which consist of 60 shacks. The lack of access to water contributed to the damaged caused by that fire. PEP has recently started working with WA towards getting the COCT to see the urgency of these shack dwellers to have proper access to water and sanitation basic services. As shacks are so densely packed, when fire does strike it spreads faster and more homes are burnt.

After fire damage the main concern is for people to rebuild their shacks. Longer term solutions’, such as re-blocking, are rarely discussed.  And the difficult part is how (outsiders) starting discussing or convince a community who has lost everything in a moment and urgently wants to rebuild about a lengthy process of re-blocking as a sustainable long term solution. 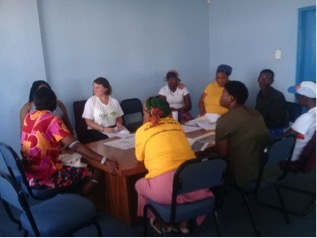 To meet the above challenges PEP is running a series of participatory design and upgrading workshops with the WA community. The first workshop took place late in 2018 and focused on the need to:

In early 2019 a further workshop took place. PEP re-introduced the re-blocking process that might be a possible solution in the future and presented three designs of different phases for Informal settlements upgrading.  The community’s response was positive as they are keen to view different upgrading intervention that are possible in their community. The general consensus was that they were happy with the position and design of the toilet blocks.

PEP’s key role as an intermediary is to create a space for the residents of WA to generate new ideas as a collective and incrementally implement them towards an upgraded future settlement. In this case we have managed to facilitate an engagement between the COCT Water and Sanitation, The Ward councillor, WA residents and other potential donors to collectively discuss upgrading options and ideas for the community.

WA residents have stressed that their priority is getting ablution blocks and taps installed as they have been waiting years for these services. This discussion also raised concerns about poor drainage systems that are close to homes and become health hazards to children and families.

The priority is to now assist the community to link with the city to access these services that would be part of the long-term upgrading plan that is currently being work shopped.