The city vision for Philippi : Where does informality fit in? 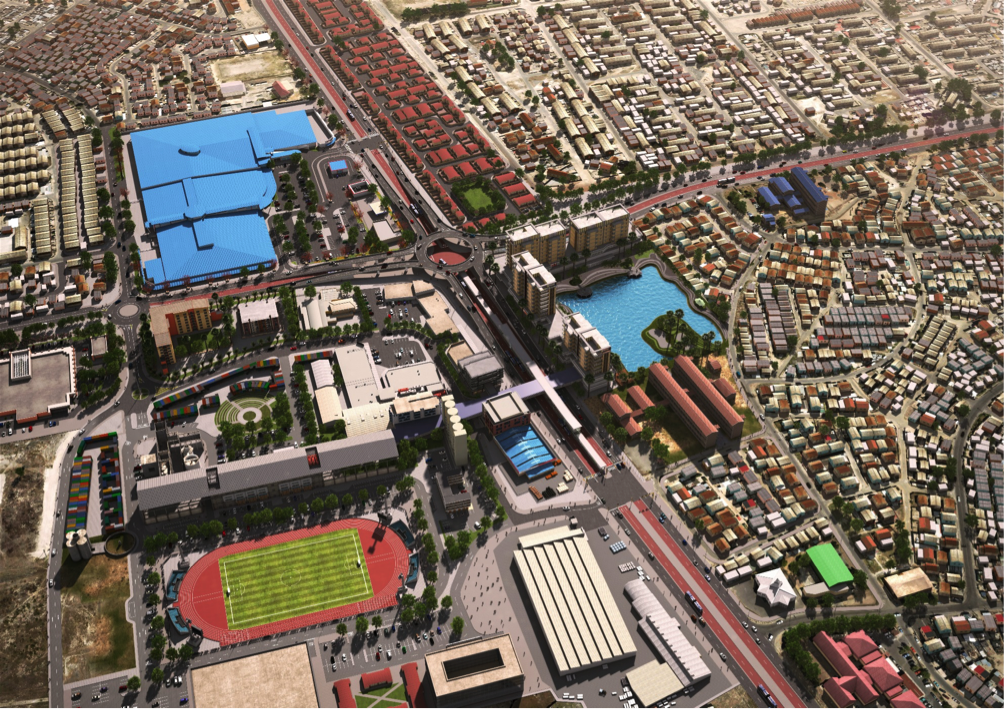 To the North West, open land is being primed for yet another low rise housing development (as part of the Breaking New Ground policy). To the North East, a retention pond stands collecting litter*; to the Southeast, informal traders spill out of containers, offering a myriad of supplies and services not proficiently covered by the stores in the area; and finally to the south west, a service station stands in the foreground, behind it a large empty piece of land – earmarked for a large shopping mall. The only vertical landmark is the industrial-era remains of the Philippi cement factory, standing out in the monotonous low rise, peri-urban landscape, marking Philippi Village, the innovative ‘business hub, the forerunning development investing in the potential of Philippi.

*Although, it is said that iThemba Labantu – Lutheran Community Centre may have something innovative planned for this retention pond.

The current Govan Mbeki and New Eisleben Roads interchange, with the retention pond to the left, and cement factory on the right.

This intersection is the ‘blank’ canvas for which the City of Cape Town local government recently announced their vision for the “re-imagining” of the Philippi central bus exchange to be located.

This vision for Philippi forms part of the City’s broad approach to tackle apartheid spatial planning through Transit Oriented Development (TOD). The proposal, put forward by the City, forms part of the MyCiti Phase 2A bus rapid transit system, which will see 6 of the 16 MyCiti trunk routes converging in Philippi, at this station. This justifies the size of the station – set to be larger than the Civic centre station in the Central Business District.

Philippi East is an extremely well located area in the greater metropolitan region of Cape Town. However, it is currently an island of disconnected industrial land, strangely wedged between the 3074 hectares of farm lands (Philippi Horticultural area) and the N2 motorway, but with no direct access to the highway or any efficient connection with the Cape Town International Airport on the other side of the motorway.

Philippi has been described as the ‘central suburbs’ and PEDI (Philippi Economic Development Initiative), a local economic development organisation which promotes economic growth and development in the Philippi Industrial area, sees it as a pivotal node for the whole city which can help to make Cape Town a more economically and socially integrated.

PEDI is driving the dialogue between all parts of the community, creating partnerships and formulating strategies to pull Philippi out of the rut it slipped into over decades of neglect as a result of divisionary apartheid spatial planning. They believe Philippi can be a shining example of how disadvantaged communities in South Africa can become “thriving economic hubs”.

On their website, PEDI CEO Thomas Swana said he welcomed the announcement of a vision that would take Philippi forward. “It is exactly this kind of catalyst that PEDI has been working to achieve to stimulate development in the area,” he said.

“I am confident that the development would inspire investments and developer investments in the area, as there will be hundreds more feet where there previously were not.” adds Tswana.

The BRT (Bus Rapid Transit) routes, are just a piece of a much larger development picture in PEDI’s eyes. And they are as excited about this catalytic project, as they are about the potential Aerotropolis – which is currently being studied as concept to deliver a “city” around the international airport.

The potential this greater connection offers Philippi is immense. Philippi could become a key node in the greater aerotropolis development, with supporting functions such as conference centres, hotels and retail spaces, thereby transforming Philippi from a transition space into a destination node. However, the vision produced by the City is an incredibly powerful image, full of idealistic developments and clean barriers between the formal and informal. While the wider connections offered by the proposed BRT hub and affiliated investment into the area are essential for the regeneration of Philippi, we can not ignore the existing structures – both tangible and tacit – and daily economic and social exchanges that afford many Philippi families their livelihoods.

There is a distinct lack of an overarching ‘master plan’ of sorts for Philippi. The area falls within the greater South East Metro Corridor in terms of the City’s Spatial Framework. But it can be argued that a much more nuanced and all-encompassing framework is needed for the precinct, to ensure an inclusive transformation of the area. This framework should integrate the large infrastructural projects, such as ACSA’s plans to expand the aerotropolis, the City’s TOD  strategies and the identification of strategic pieces of land for medium density, mixed use housing developments; together with the smaller civil society organisations working on smaller, sometimes overlapping, projects in the area.

Looking at the current state of Philippi, it is impossible to ignore the growing number of informal settlements within the precinct, home to thousands of residents who are likely to qualify for state subsidised housing. While these images were released for marketing purposes and are by no means the final blueprint for development, the images introduced the notion of high density residential blocks flanking the revitalised retention pond – possibly private rental stock, possibly for a new state subsidised housing model. High density residential areas are a key component in TOD strategies, as they provide the necessary passenger traffic for the transport systems to be economically viable. But without an overarching plan, explicit housing and land regulations this prime land could easily be lost to greater market forces, merely perpetuating spatial inequalities seen in the CBD. With potential increasing land prices, historic residents could be tempted to sell their property for inflated prices, find themselves unable to afford anything else in the area, and slowly be displaced further from economic and social opportunities. Philippi’s history of being an undesirable urban periphery will not protect it from the cycles of displacement and gentrification.

Many current residents of the area (including suburbs such as Cross Roads, Nyanga and Browns Farm) have long, historical relationships with the area. While others, have moved into Philippi, because of its centrality and the (relative) ease of access to a variety of work opportunities that offers. There is a certain availability of space and rental accommodation is seen to be relatively affordable. Some of the historic informal settlements remain, while others have been upgraded to formal houses. Backyard shacks now cater to the rental demand, provide an additional source of income for homeowners and new informal settlements have been established. In all instances, Philippi is currently an affordable residential option – an opportunity at risk of being lost in unchecked development and ‘regeneration’ left to market forces.

There is currently state subsided BNG (Breaking New Ground, a South African housing policy) housing being built along Govan Mbeki Road, on the north east boundary of the intersection- services have been laid, but the houses are still to be built. In the absence of an overarching spatial development plan – one which accounts for future growth and BRT connections – prime TOD land is currently being developed in the same low density, unsustainable, sprawling “business as usual” manner.

There are clear indications that Cape Town is growing into a multi-central city. Century city, Bellville, Blouberg, Claremont and potentially Wescape (however controversially) are all secondary centres commuters traverse to on a daily basis. These secondary centres and the two-way movement of traffic they create – are critical for the viability of the BRT system.

With it’s centrality and proximity to the airport, and the proposed bus connections to the far reaches of metropol, Philippi East is primed to be another of these central nodes. And if the City’s vision is anything to go by, the amount of state investment into services and infrastructure will drastically increase the property values and private developer interest in the area. The future of Philippi is set to be a very different place. No doubt that the same thing was said about Woodstock, 15 years ago — and today, it faces some of the most contentious evictions in the City’s short democratic history. In hindsight, it is easy to say what the City can and should have done to protect ‘vulnerable’ residents from spatial injustices of gentrification and urban regeneration in the face of rapid, tax-incentivised developments. A difficult but incredibly necessary task in the case of Philippi is setting up the policy framework and development parameters which will allow for equitable and inclusive regeneration of the area.

Some experts suggest that Phillipi will need to grow to the size of the Claremont Central Business District to make the transport investment viable. Currently in Philippi 44.3% of dwellings are formal dwellings and 30% of Philippi’s residents earn between R1 and R19 000 – the ‘affordable’ housing bracket (census data). Allowance for well-designed, centrally located and dense state subsidised housing developments (be they social housing, BNG developments, or the next generation of state subsidised housing policy) needs to be made at the outset to ensure the development of an inclusive centre.

In South Africa, we are still largely grappling with apartheid’s spatial legacies, constantly seeking ways to re-integrate the inner cities; as well as tussling with the idea of township regeneration and the spatial and economic potential this notion holds.

We need to accept that informality is part of the intricate social and spatial fabric of our townships and is unlikely to be eradicated. Rather than constantly pushing informality further from spaces of opportunity, township regeneration programmes need to make allowances for this  informality. While the development of the MyCiti routes and the connections and mobility it offers to residents is welcomed, the biggest downfall of this particular vision is that it does not acknowledge and design for the inclusion of the current status quo of Philippi. Furthermore, it is glaringly obvious that supposed ‘trickle down’ benefits are getting stuck somewhere in non-pro-poor spatial policies. That being said the vision for Philippi is, none the less, a start. If we are going to achieve more equitable cities, we have to engage with and challenge this idea from the start to ensure the outcome is indeed, equitable.

How can informality be included in this vision?

Some initial ideas include: