CONTRADICTIONS BETWEEN POLICY AND PRACTICE: Challenges in Providing Low-Income Housing in Cape Town

A cursory analysis of current National Housing Policy indicates, at least in writing, a will to redress spatial inequality through the provision of well-located opportunities (green-field and in-situ) for the urban poor. Numerous statements, housed in a variety of documents exemplify the above intent. For example Outcome 8 of the National Development Plan (NDP) argues that the NDP should:

However when it comes to the “realpolitik” of delivering houses for the poor, on the ground, matters are very different. In our experience a slew of ordinances, regulations, unforeseen costs and bureaucratic red-tape delay and undermine the policy visions expressed above. These “processes” (for lack of a better word) are singular, inflexible and reflective of a formal market driven approach and, with few exceptions, “hostile” to the vision of an inclusive city. The argument that they are necessary to ensure development norms and standards is, to a degree, valid but does not recognise the realities of informality and the overarching vision of creating a more just city. The following example hopes to demonstrate that it is these myriad processes, and their ignorance of the realities of informality, that underpin and perpetuate the spatial inequality of Cape Town.

In a previous blog post the history, and challenges, of the Ruo Emoh Housing development in Mitchell’s Plain, Cape Town, were outlined. These challenges were, in no small part, due to the inflexibility of, and delays in, multiple legislated development requirements (e.g. subdivision & rezoning approval, NIMBY interference, SPELUM applications). Confusion between, and contradictory messages from, various city and provincial departments also played a significant role in de-railing the project – as did the active interference of the local councillor. 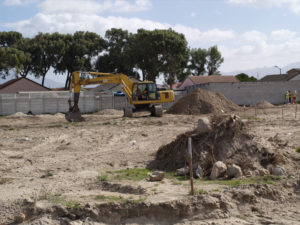 Now in 2016, when huge effort, risk and finance is being invested in kick-starting the project, history is beginning to repeat itself! As noted, the housing development process is immensely complex, involving multiple concurrent and sequential steps – from infrastructure layout and installation to subdivision approval and eventual top structure construction. Delays in one area have a knock on effect – costing both time and money. Beneficiary screening for the development, conducted by Province, was promised to be concluded two weeks after submission (Early Feb 2016). Currently (June 2016) only 36 of 49 names have been approved. Without a finalised list of beneficiaries, subsidies for infrastructure cannot be drawn down and cash flow challenges arise (In addition the community cannot be properly organised).

While the project was partly pre-financed, at considerable risk to Utshani Fund, the contract underpinning subsidy recovery from Province/City of Cape Town has taken over 6 months to be finalised (even though the project was budgeted and approved). In large this was due to internal dynamics between The City of Cape Town and Province – largely out of PEP’s control. Once again this will impact cash flow, lead to delays and possibly a site that could sit for months with completed infrastructure (extremely vulnerable to theft and vandalism) before top-structures can be built.

A glaring contradiction is that the subsidy amount available is simply not sufficient to cover all the formally legislated development requirements. The subsidy barely covers infrastructure and top-structure installation but numerous other costs exist: a legally constituted Homeowners Association, project management fees, safety officers on site (legally mandated by the city during construction but not provided for within the subsidy), non-refundable deposit (The city’s choice of words) for linking the development to the City’s water mains, General plan, surveyors general fees, transfer costs etc… These costs are significant (approximately R500,000 or R10,000/member in this particular case) and will ultimately be borne by the project beneficiaries. Furthermore they must all complied with before subdivision clearance will be issued. The question one must ask is whether all these strict conditions (and associated costs) really favor pro-poor inclusive development?

When it comes to meeting the conditions of subdivision (a necessity before any houses can be built) electrical infrastructure must first be installed. Not only must separate funding from the city be applied for but said infrastructure, once installed, will be extremely vulnerable to theft/vandalism. Theft and damage, can be prevented if electrical installation takes place at the same time or after the top-structure construction. But top-structure construction is not possible until the subsidies for infrastructure have been accessed – which depends on transferring erven and clearing subdivision that, as you may recall, cannot happen until electrical infrastructure is installed! You may need to read the above sentence twice but it epitomises the type of “catch 22” contradictions that consistently arise!

Spanning across the project, contradictory messages from various city departments further muddy already murky waters. For example the city’s project management department assured PEP that there would be little problem in clearing subdivision without completed electrical infrastructure (submitted plans would suffice) – mitigating against theft and vandalism. However the electricity department categorically stated that they would not, under any circumstances, sign subdivision clearance without infrastructure in the ground! Furthermore the responsibility for securing said infrastructure against theft/vandalism must be entirely borne by the developer – a further cost which, in reality, could be used to improve the quality of the top-structure (a goal that would do far more towards promoting inclusive housing).

The above cases are mirrored in numerous other developments related to housing and upgrading for the urban poor. How are poor communities meant to meaningfully participate?  How are they meant to find finance for unsubsidised expenses? And why are the rules applied so inflexibly without being weighted towards building an inclusive city? 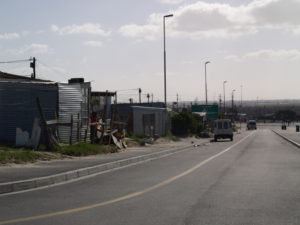 While big-picture ideological battles (such as that over the development of the school site in Tafelberg, Sea Point) are important “flash-points”, they are symptoms of the multiple rules that, at every possible turn, counter equal and inclusive development. Political will, as reflected in policy and the statements of high-level politicians, promulgates the notions of inclusive cities but whether complicit, or unintentionally, this is contradicted by multiple technocratic regulations. Many examples exist of political pledges to support specific inclusive pro-poor housing projects that have subsequently stalled in a quagmire of regulations (An all too convenient excuse for officials).

That such regulations should exist is not in question (there have to be laws that govern the development of cities) but why should they be so inherently biased against inclusive, pro-poor development? It is in this space, not the lofty ideals of empty political rhetoric, that the true battle for the heart of the city really takes place.